The MySpace guys won the latest launch party battle. About 200 people met at the new MySpace house last night in San Francisco to see what the company was going to do to compete with Facebook on the developer front. 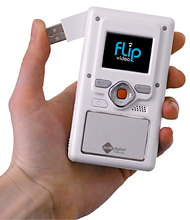 They had a fully catered event including an open bar with some good whiskey. The schwag bag included the Flip digital video camera (wow!). There were a small handful of very basic demos on the floor from the usual suspects (Slide, iLike, Flixster, etc.). And the presentation was short and sweet so we could get back to socializing.

The party wasn’t without flaw, mind you.

First, the date. Why throw a launch party on the same day as the biggest political event in our time, Super Tuesday? The headlines were on everything but the MySpace launch. The right people knew what was going on, but the impact was severely muted. I was somewhat eager to leave to find out what was happening out there in the real world.

Second, the presentation. You have to appreciate them keeping it super short. Once the drinks start flowing, it gets very hard to keep people quiet for more than a few minutes. But I think most everyone there was actually very interested in hearing something meaty or a future vision or something. Bullets on a powerpoint rarely impress.

Neither of those things really mattered, in the end. The party served its purpose.

It also occurred to me afterward that it would have been a shame if the co-founders and executive team weren’t there. But they were very much in this and made themselves accessible to chat. This isn’t a sideshow move for MySpace. It matters to them.

Contrast this with the standard formula followed by the Bebo guys, and you can see why MySpace does so well in social networking. They embody it as a company.

Now, whether or not they can raise the bar on app quality or improve on distribution for apps is yet to be seen. By giving developers a month to get their submissions in for the end-user roll out they are resetting the playing field. That’s great. But I’m not sure whether the MySpace user experience will encourage the sharing of apps as fluidly as the FaceBook UE. I don’t use it enough to know, to be honest.

As far as the platform itself goes, I’m curious about the impact the REST API will have. I’ve wondered how the social networks would make themselves more relevant in the context of the world outside the domain.

Overall, good show. This should help bring back some of the MySpace cool that was lost the last year or so.